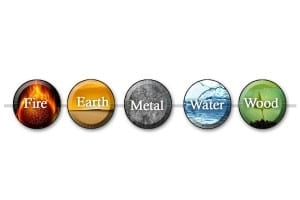 The next several blog post will focus on one of the foundations of traditional Chinese medicine (TCM), which is Five Element Theory.  I will go over the Five Elements in terms of the meridians and organ systems with which they are associated. Because the Yin organs are considered the most precious (for reasons mentioned post on the Vessels and Gates), for each Element I will focus on its associated Yin organ. I will follow the creative cycle  starting with the Fire Element.

Finally, one more important note: The Chinese references are not exactly the same as the Western labels for the anatomical organs.  For example, when TCM refers to the Kidney, it is referring to the energy of the Kidney system—not necessarily to the physical organ, the kidney.  Thus, if a Chinese doctor tells a patient that he/she has Kidney problems he does not necessarily mean she has kidney disease.  To remind the reader of this distinction, I will capitalize the organ names when they refer to the Chinese concept, and not capitalize them when they refer to the physical organ.