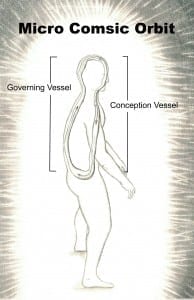 Although the ancient texts say it should take one hundred days (about three months) to open the Gates and feel the flow of Qi, for me it took six months. I did the meditation regularly, every day, and felt nothing… until one day I felt the tip of my tongue pulsating or vibrating where it rested on the roof of my mouth. Since then I have gradually been able to increase my awareness. First, I could feel the Qi throughout its route in the Governing and Conception Vessels, then I could feel it in other organs. I believe doing the Micro-cosmic Orbit is a fundamental first step in following, and eventually, controlling one’s Qi.