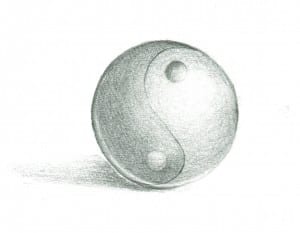 Yin and Yang are philosophical concepts based on relativity. While they are fundamental to Chinese philosophy, they are foreign to Western philosophical thought. Generally speaking, Western philosophy seeks absolutes. It seeks to determine what is true and what is not true. In contrast Chinese philosophy is interested in relative relationships, and these relationships are described as Yin and Yang. Just as something is big or small according to what you compare it to; similarly something is Yin or Yang according to what you compare it to.

It is said that Yin and Yang were first defined as the two sides of a hill, one dark, the other light; one cool, the other hot. This led to the observation that every phenomenon is constantly cycling between two opposite poles. Night becomes day, which becomes night. Heaven is yang, round; Earth is yin, square. More active, brighter, more expansive is relatively more Yang than that which is quiet, dark, contracting. Yin and Yang are at the same time opposites and complements. Further, Yin contains the root of Yang and Yang contains the root of Yin; Yin at its extreme becomes Yang, while Yang at its extreme becomes Yin. For example, frantic activity (Yang) often leads to collapse (Yin). Yin and Yang are interdependent by definition, and they are constantly interchanging, one into the other.